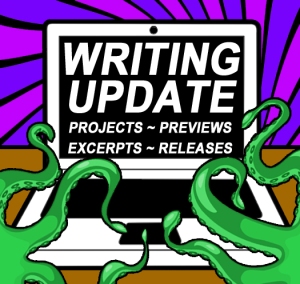 Currently I’m working on ‘The Darkwood Mysteries: The Rise of the Dragon’, which sees the return of the Mandarin. A child has been abducted, and a Chinese man stands accused, threatening to ignite the London mob. But, as ever, things are not what they seem. The Mandarin has Darkwood and Captain Carstairs playing one game, while he is playing another–he can’t lose…

It’s been a different experience writing this entry into ‘The Darkwood Mystery’ series–Hobbs isn’t present for much of it, so it’s in the third person from all the information given to Hobbs after the fact and wow, I have always written in third person for my contemporary horror novels, but switching back after so long writing this series has been jarring. I would be in the flow, tapping away at the keyboard and then find I’d slipped back into first person… Cue swears.

I have a bit of an issue with the end, which revolves around parliament and Big Ben, as I need some technical information about the Great Clock. So far I’m drawing a blank through the Internet of things, and horologists and parliament aren’t getting back to me. I really don’t want to blag it. If there are any horologists who know about big clock mechanisms and it’s 2019 and I haven’t published yet, then hit me up!

The last couple of blog posts have boasted about my kick-starting my writing again (not actually on Kickstarter). I’m obviously not going to quit my job for this–until I can–so the first step is to figure out what I can realistically achieve. I figure if I do a minimum of 3000 words a week and allow for a number of ‘holiday’ days off, I can still get a novel done a year. I might not be able to release a novel a year, what with editing and all that goes with prepping a book, but that will be my aim. So, I have an achievable target, which is always great when setting goals.

First step for me is finish the next run of ‘The Darkwood Mysteries’. I only have one more after the current one and it should be a short one. I’ll be editing these and getting an editor for them while I start work on other things cue step two…

Second step is to redo the cover for ‘The Pack’. It’s too murky. I’m pretty happy with the others, but might switch out the font, and make the titles white so they really pop as a thumbnail on the apps.

Third step is ISBNs for all four of my contemporary horror books. This is going to cost money, so this might have to wait until we’ve moved, but I’ll see, as I’m already working on a writing budget.

Fourth step–if I have the ISBNs–format all my contemporary horror novels for print releases.

Fifth step is to do covers for all ten of the new Darkwood Mystery releases, and release them.

And that’ll do for now as I imagine that will be most of 2019, and that’s me for April.

What do you think? Cancel reply