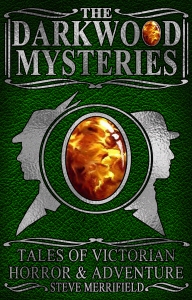 When Emily Darkwood was a child, her mother and father disappeared. As an adult, she is heir to the Darkwood estates and wealth, affording her comfort and a freedom of choice rare for her gender in Victorian English society—yet she is haunted by the fates of her parents. A mystery deepened by her inheritance of a stone of amber which reveals itself as more than a mere gemstone through dreams and visions of terrible happenings—nightmares which quickly become experiences threatening her life and those around her.

Darkwood explores the darkness that encroaches upon her through the stone, certain her parents had similar experiences with it. Ably supported by her young servant companion, Jack Hobbs, she is led by the stone from fog shrouded cobbled streets, to panelled halls of gaslight and shadow, in pursuit of the mystery surrounding the stone and her missing parents. Yet the path to truth is a dangerous one, and others who fear discovery through the stone or seek its power for themselves, threaten Darkwood and all she holds dear—her friends, family and her pursuit of a career in surgery.

Darkwood and Hobbs, armed with her quick wits, sword-stick umbrella, steadily aimed revolver, and his street knowledge and fierce loyalty, find themselves pitched against villains, murderers, secret societies, cults, and eldritch creatures and otherworldly beings, while conspiracies that threaten their lives, and the world around them unfold in this series of short stories and novels, which can be enjoyed as individual tales or together as part of a deeper and greater mystery…

Available to download now from Amazon UK, US & other markets.